It’s estimated that data breaches exposed over 4.1 billion records in the first half of 2019 and that 62% of businesses experienced disruptive phishing and social engineering attacks in 2018. Perhaps unsurprisingly, worldwide spending on cybersecurity is forecast to reach $133.7 billion in 2022. It’s in this seller’s market that CybelAngel — a digital risk management platform that provides actionable threat intelligence — is raising venture capital.

CybelAngel today announced that it has raised $36 million in a series B round co-led by Prime Ventures and TempoCap, with participation from Bpifrance, Open CNP, and new investors Datadog CEO Olivier Pomel, Datadog CTO Alexis Le-Quoc, Tenable CTO Renaud Deraison, former Black Duck Software CEO Lou Shipley, and former Neolane CEO Stephan Deitrich. The raise follows a $11.3 million series A round in October 2018 and a $3.3 million seed round in June 2017 and brings CybelAngel’s total raised to over $50 million.

According to CEO Erwan Keraudy, who cofounded CybelAngel in 2013 with former Accenture consultant Stevan Keraudy and Matthieu Finiasz, the fresh funding will fuel CybelAngel’s global expansion as it inks new strategic partnerships and advances its platform’s capabilities.

“The acceleration of digital transformation and the proliferation of connected devices has created an explosion of both malicious and negligent risks,” said Keraudy. “This funding enables CybelAngel to expand globally to more countries and continue to innovate to protect enterprises’ most critical digital assets from costly data leaks. It will also support our expansion in North America, where the demand for digital supply chain protection and third-party risk management is growing exponentially.” 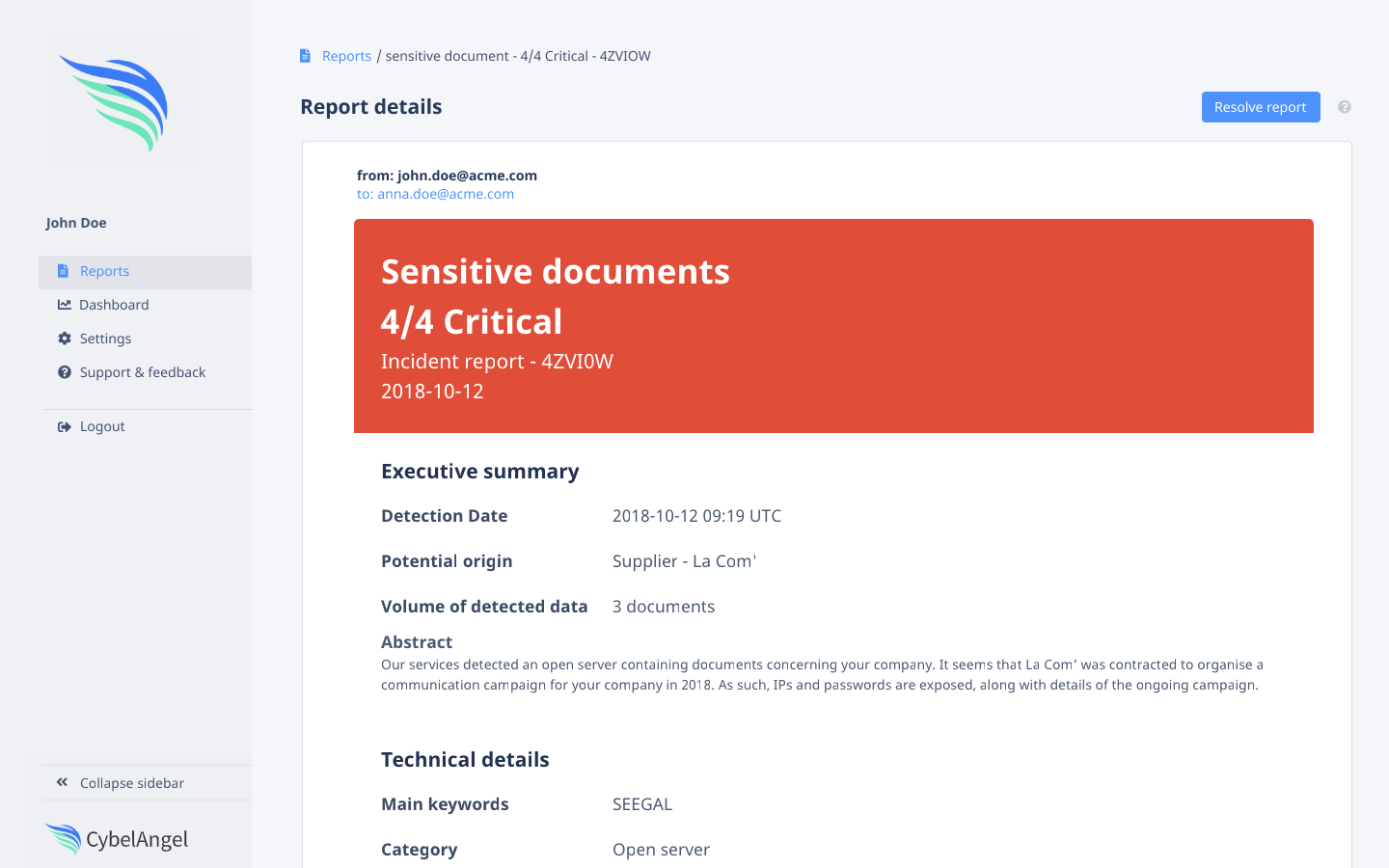 CybelAngel — which in 2015 uncovered the notorious Ashley Madison leak of more than 36 million accounts — monitors three critical attack vectors: the “surface web,” or the public layer of the internet that’s indexed by search engines and generally accessible (e.g., GitHub, Pastebin, Scribd, SlideShare, and Twitter); the “deep web” and dark web, or networks, forums, and marketplaces that maintain highly restricted access; and connected storage like laptops and network-attached storage drives. It’s a lot to juggle, but as Keraudy explains, a combination of AI-imbued scanning tech and human analysis enables CybelAngel to analyze thousands of files,  hundreds of potential threats, and billions of data sources.

When CybelAngel spots a data leak or digital threat, it alerts the customer in question, providing all the actionable information they might need for remediation. IT teams can integrate CybelAngel’s tools with platforms like ServiceNow, Splunk, and Jira, using its API.

Competition is fiercer than ever in a global cybersecurity market that will soon pass $300 billion, according to Global Market Insights. There’s IntSights, which in November 2019 raised $30 million for its cloud-hosted cyberthreat detection and remediation solution, and TrapX Security, which recently raked in $18 million to thwart cyberattacks with decoy assets. That’s not to mention San Francisco-based ZecOps, which last November nabbed $10.2 million for its tech stack that automates detection, analysis, and response to cyberattacks on endpoints and servers; Trinity Cyber, whose threat-combating suite combines detection with “adversary inference”; and Lacework, which In September 2019 nabbed $42 million to protect cloud environments from data breaches.

But Prime Ventures partner Pieter Welten, who joined CybelAngel’s board of directors as part of this latest round, points to the startup’s marquee customers — Danone, Airfrance, AirLiquide, Total, Pinsent Masons, and Sanofi — as evidence of its success to date. “CybelAngel’s technology is a must-have in every CIO’s cybersecurity posture. Their solution has already been successful at saving customers billions of dollars’ worth of potential damage from data leaks,” he said.