The MSI GS65 Stealth Thin 9SD has a tradition to uphold. Its predecessor, MSI’s GS65 Stealth Thin 8RE, was the laptop that changed our perception of just how much real gaming performance you could pack into a thin-and-light gaming laptop. With the next generation, we find essentially the same winning laptop design, stuffed with the latest toys from Intel and Nvidia.

We’re not exaggerating about the original GS65 Stealth Thin 8RE’s wow factor, either. It was just a hair over 4 pounds, in the same weight class as a Macbook Pro 15 or ThinkPad X1 Extreme, yet it packed way more firepower.

The newest incarnation of the MSI GS65 Stealth Thin 9SD ups the ante with Intel’s newest 6-core 9th gen Core i7-9750H, along with Nvidia’s gift to those who just don’t give a damn about ray tracing: A GeForce GTX 1660 Ti. Thanks to a slight lack of coordination between Intel’s and Nvidia’s product cycles. The GS65 Stealth Thin will find itself battling with laptops such as Acer’s Predator Triton 500  or Alienware’s m15 Thin, both of which feature older 8th-gen CPUs, but Nvidia’s newer ray-trace-enabled RTX GPUs. 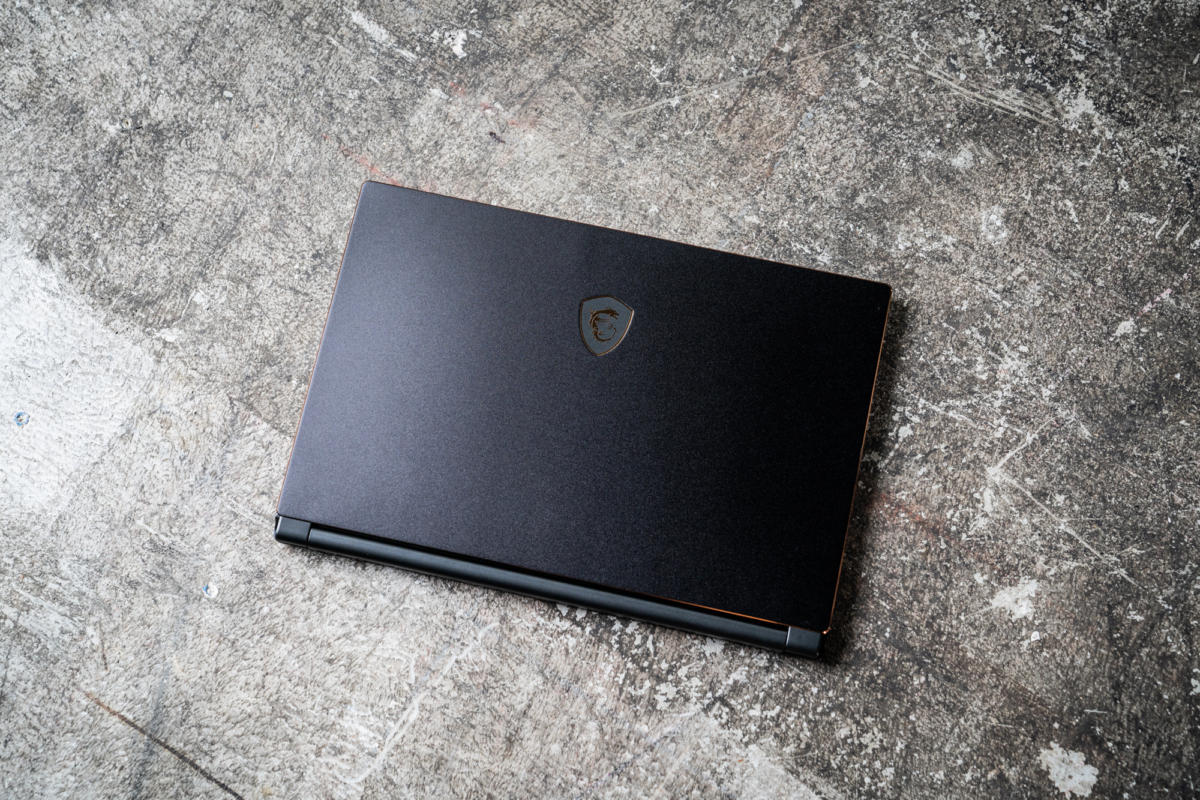 As we said, the GS65 Stealth Thin is the first laptop we’ve reviewed with Intel’s 9th-gen mobile 6-core CPU. Let’s run down all the specs:

That last bullet point is worth pointing out. While the original GS65 we reviewed last year was stupidly light at 4 pounds, MSI has added about 6 ounces to it. Some of that heft likely came from welcome structural reinforcements compared to the original run, which we called “flexible.” How flexible? Well, let’s just say it was a little scary to pick it up by one corner. The current version doesn’t flex much at all, but it’s definitely a little heavier unfortunately.

As a gaming and workhorse laptop, the GS65 brings on the ports. The right side gives you USB-A, Thunderbolt 3, miniDisplayPort and full-size HDMI. Careful observers will also note the dedicated power plug on the right side. That may tick off some right-handed gamers who don’t like power cords on the same side as their mousing hand, but MSI does at least provide a right-angle plug to make routing less obtrusive. 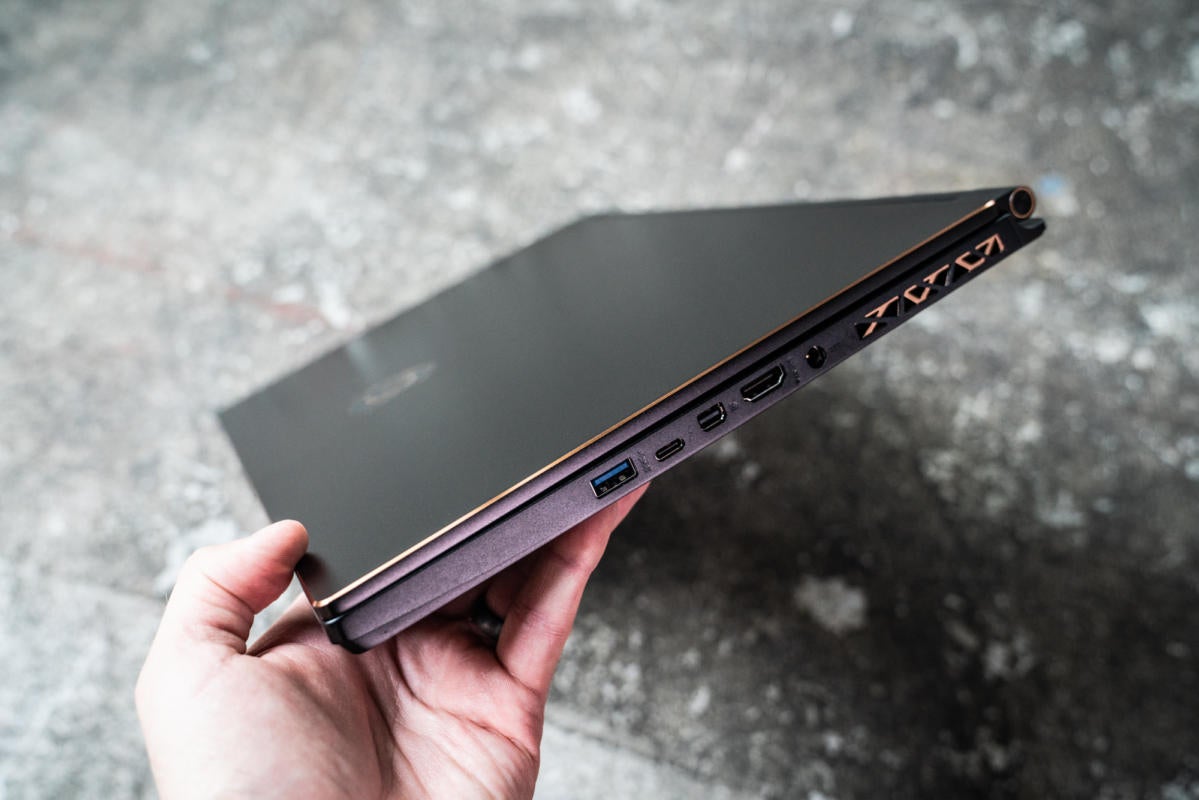 The GS65 Stealth Thin 9SD controversially puts the power plug on the right side, which could annoy some gamers.

On the left side you get two USB-A ports, an analog headphone port, mic-input, Kensington Lock Port, and gigabit ethernet using a Rivet Networks Killer NIC part (made by Atheros). For those seeking state-of-the-art 2.5Gb ethernet, the GS65 Stealth Thin isn’t there yet. To be fair, however, very few homes or offices have routers that could take advantage of it. 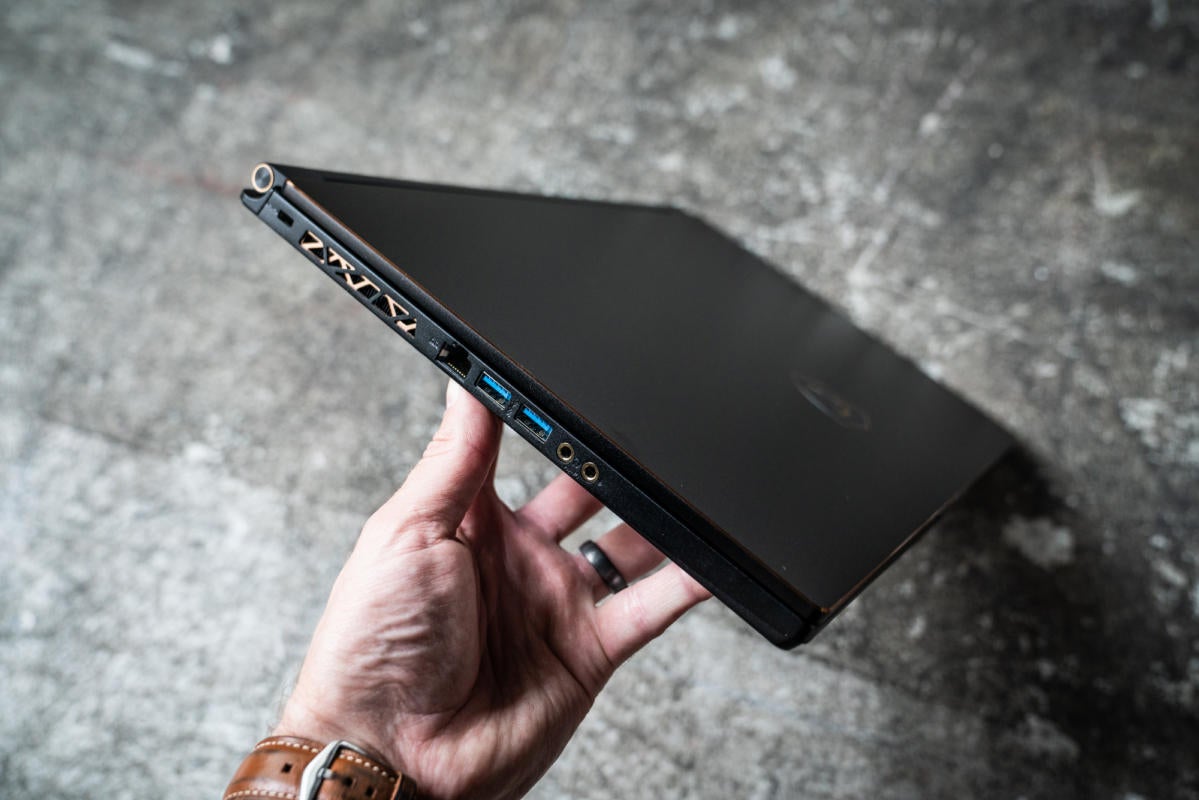 For keyboards, you get a SteelSeries dome-type with per-key RGB lighting. The key action is good and features full-sized cursor keys. Overall, there’s no major faux pas, such as oddly placed or half-sized keys.

The trackpad, however, is going to cause consternation among some people. It’s a wide aspect-ratio trackpad with a fairly smooth surface. The original GS65 Stealth Thin 8RE featured a more conventionally sized trackpad, centered on the Y key. The GS65 Stealth Thin 9SD’s trackpad is so wide it’s centered nearly an inch to the right of last year’s model, making it almost impossible to keep your right palm off of it while typing. To its credit, however, the palm rejection is excellent. And if you mouse with your thumb instead of your index finger, as some people do, this trackpad is for you.

Our last word on the trackpad is to point out that it’s compliant with Microsoft Precision Touchpad drivers. That means you get access to the full gestures of Windows 10, and technically it’s been tested to meet the Microsoft’s criteria. 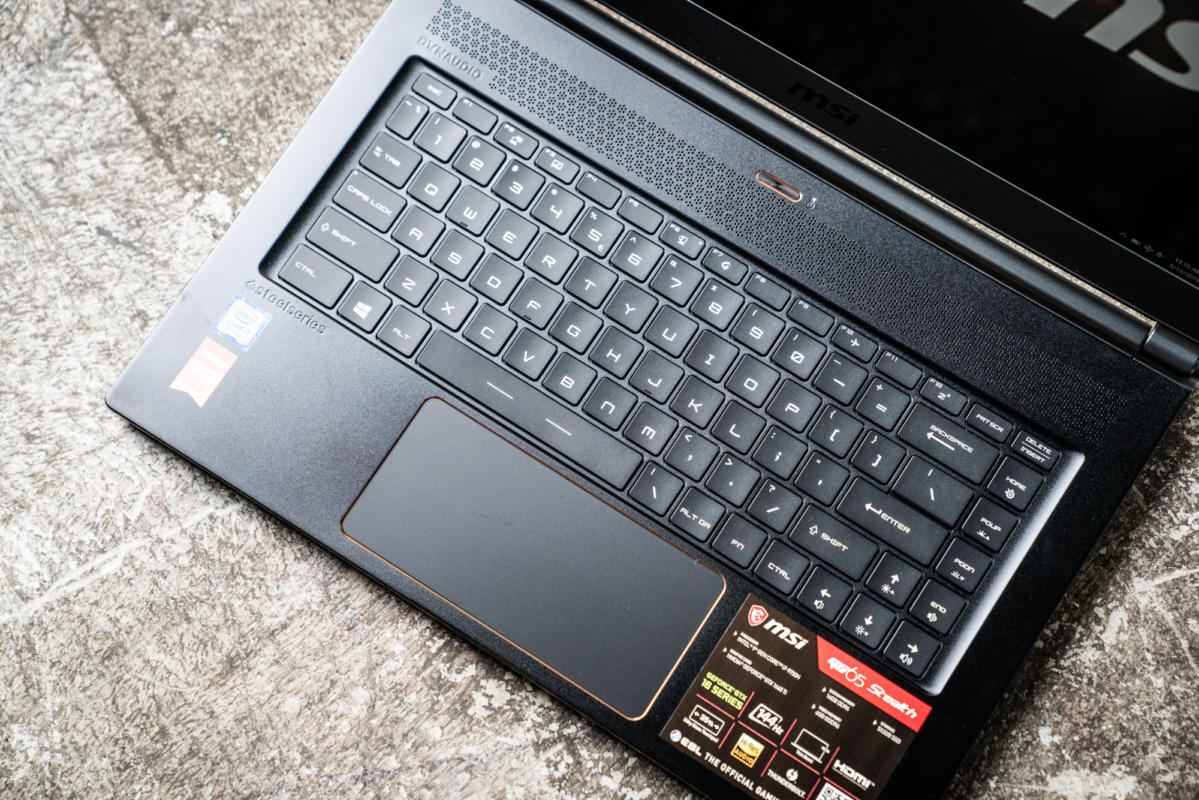 Outside of hulks such as Alienware’s Area 51m, upgrades on gaming laptops are generally limited to storage and RAM. With the GS65 Stealth Thin, however, the inverted motherboard design places the two M.2 slots and two SO-DIMM slots out of reach. You’d need to remove ribbon cables and pull the motherboard out of the system to upgrade either. That’s just not something the average person is going to attempt, because bending a ribbon cable would likely brick the laptop.

MSI isn’t the only company to make life harder like this. Asus does it on its ROG Zephyrus, and Acer does it on its Predator Triton 500. We should note that bigger-sibling MSI GS75 at least gives you easy access to the M.2 drives. 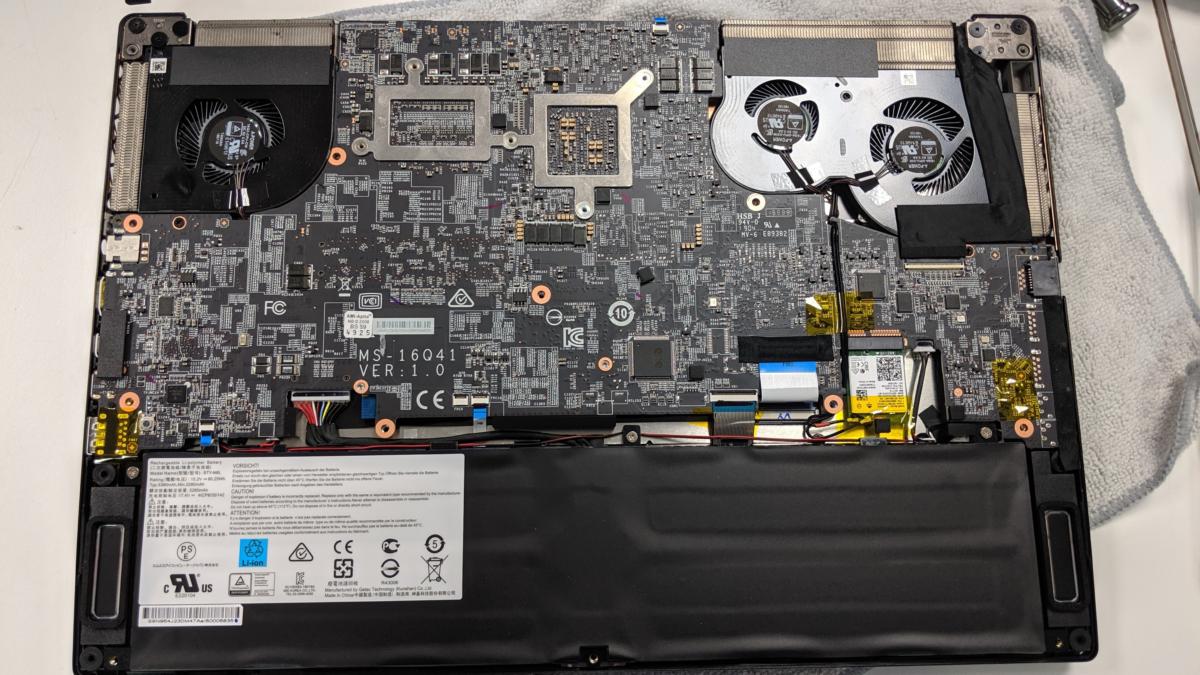 MSI’s GS65 Stealth Thin continues to use an inverted motherboard design which makes adding storage or RAM a scary proposition for most consumers.

There are two big upgrades inside the GS65 Stealth Thin, and it’s worth looking at just what you get. If you read our story about 8th gen Core i7 vs. 9th gen Core i7, you that going from an 8th-gen Core i7-8750H to a 9th-gen Core i7-9750H is nothing major. There’s no core jump from one generation to the other, for example. You still get a decent 15-percent base clock difference (where the CPU runs at during worst-case scenarios), and a 9-percent increase in Turbo Boost.

We see that play out in our Cinebench R15 3D modelling test, which pushes all the cores of the CPU. The GS65 Stealth Thin outpaces all Core i7-8750H laptops by a decent margin and can actually stand with 8th-gen Core i9 chips. For the most part though, we’re looking at about 9 percent more performance. 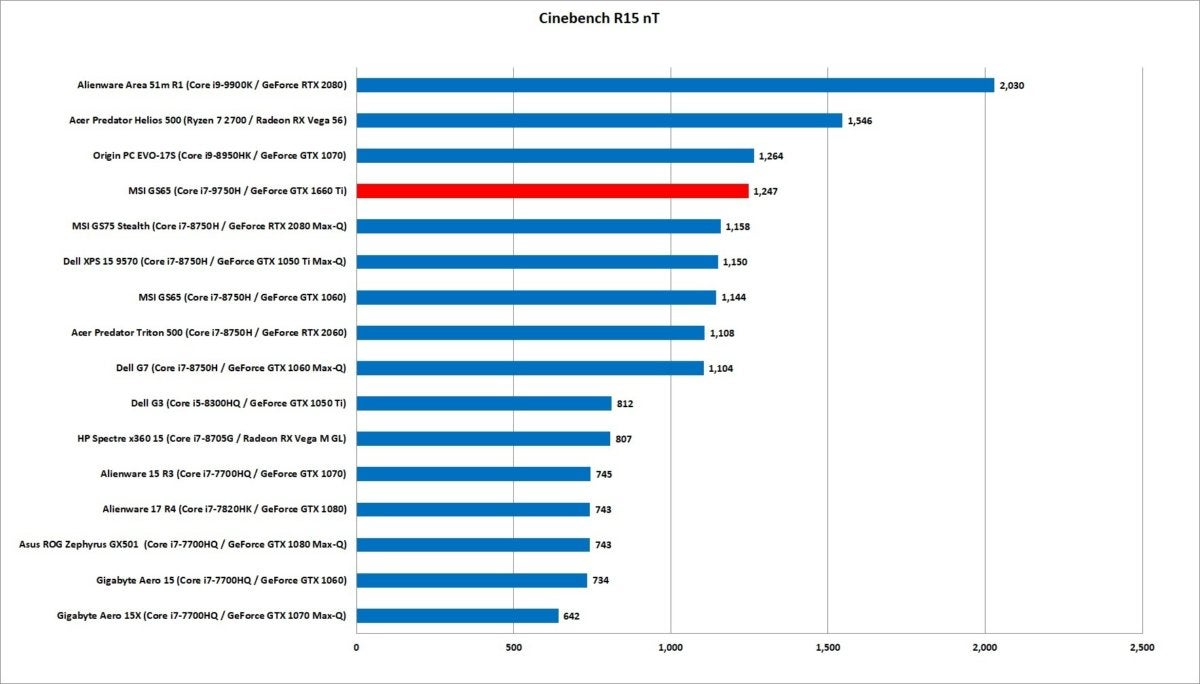 We’re we too harsh? There’s no additional cores in the 9th gen Core i7-9750H but the performance boost is respectable.

Running Cinebench R15 on a single core, we also see the 9th-gen pull out ahead. The difference narrows to about 5 percent between the old GS65 and the new one. 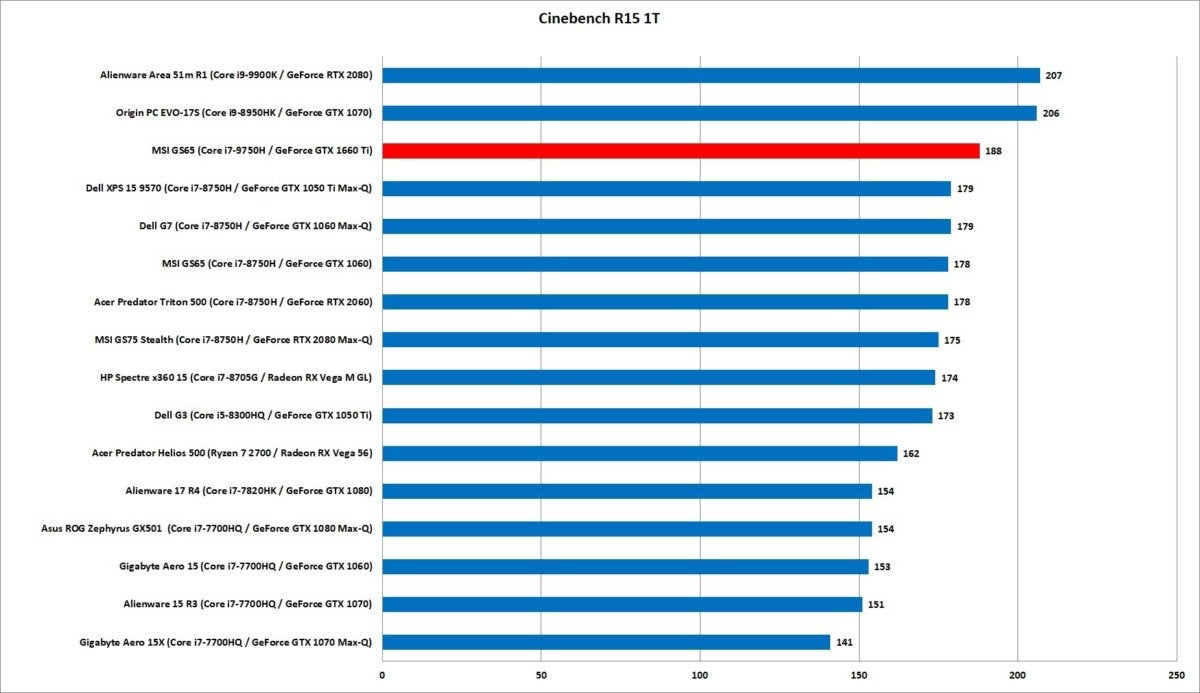 Cinebench runs in just a few seconds to couple of minutes. That’s not enough to heat up the laptop. To see how it performs under more adverse CPU conditions, we use HandBrake to encode a 1080p video. The run can take 30 minutes on a 6-core CPU. 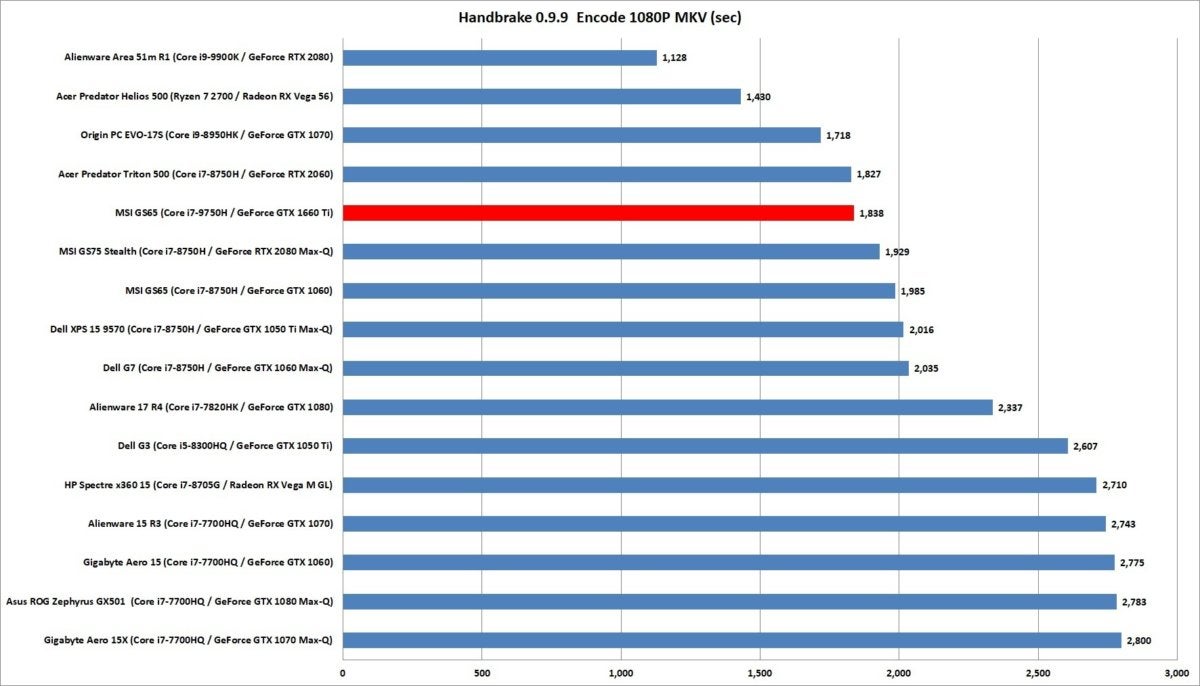 In our lengthy HandBrake encode, we can see the impact of running the CPU harder for a longer period of time.

Our first gaming test is UL’s popular 3DMark Fire Strike test. We focus on the graphics result, which filters out the CPU’s impact. First up, we can see that when compared to the previous GS65 Stealth Thin 8RE and its GeForce GTX 1060, the 9SD sees a hefty 19-percent step up in performance. 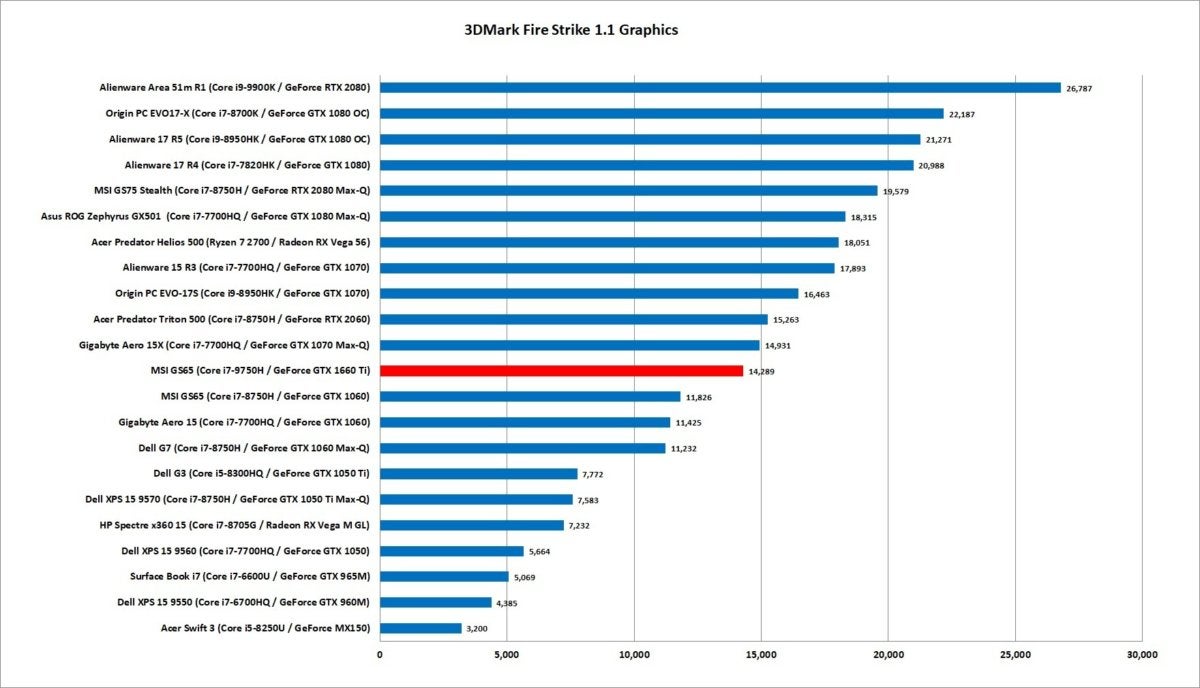 One issue with Fire Strike is its vintage, so we also ran 3DMark Time Spy 1.1, which tests DX12 performance and uses far more advanced graphics techniques. For example, while Fire Strike might invoke 1.5 million shaders in one test, Time Spy will invoke 29 million. We see about a 35-percent jump in performance with the newer GS65 and its GTX 1660 Ti, over the original GS65 and its GTX 1060. 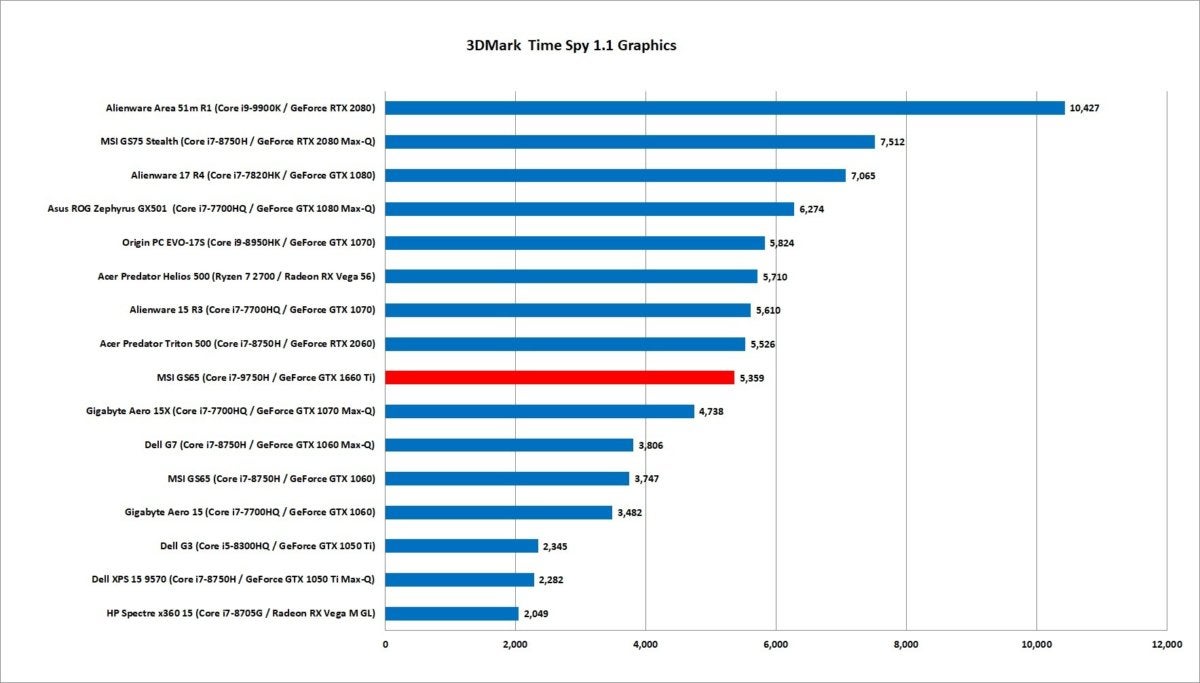 In DX12 tests with more shader and compute tasks, the GTX 1660 Ti easily steps away from GeForce GTX 1060 and GeForce GTX 1070 Max-Q laptops.

To back up our synthetic tests we also run real games, and the results pretty much track as expected. In Rise of The Tomb Raider at 1920×1080 resolution set to Very High quality and in DX11 mode, the GS65 Stealth Thin’s GTX 1660 Ti runs away from the older GTX 1060, keeping pace with most GeForce GTX 1070 and GTX 1070 Max-Q laptops. 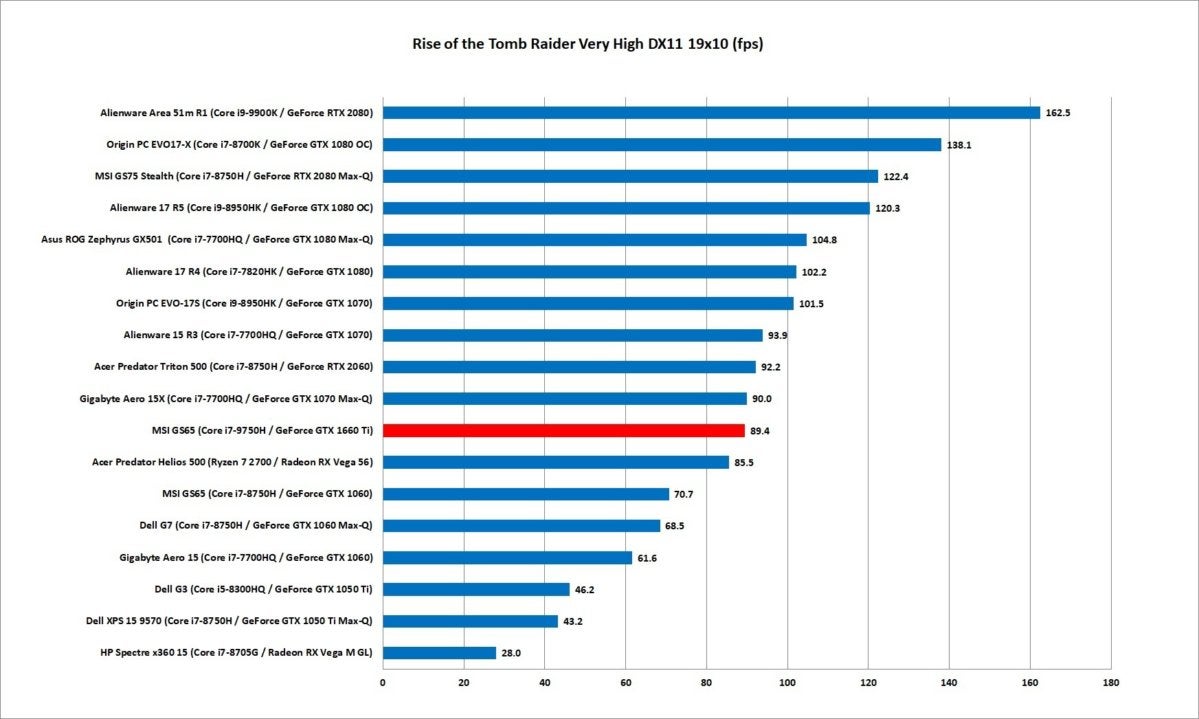 Rise of the Tomb Raider echoes our synthetic 3DMark results for the GS65 and its GeForce GTX 1660 Ti GPU.

Our last test looks at the all-important battery performance. While large desktop replacements will likely they spend most of their life on a desk, portable gaming laptops mat get called into service because they’re more mobile.

MSI’s design cues for the newest GS65 follow what it did for the original GS65: It puts in a decently-sized battery of 80 watt-hours instead of saving on weight and size with a smaller one.

MSI also skips Nvidia’s G-Sync technology, which means when the discrete GPU isn’t in use, the laptop can run off the CPU’s graphics cores and save power.

It all adds up to to about six hours of battery life when playing a 4K video in airplane mode, at a relatively bright 250 to 260 nits. We’d rank that in the good range. In general use where you don’t push the GPU or CPU hard, we’d say expect from four to six hours depending on the task. If you run a game or CPU-intensive task, expect battery life to plunge to an hour or two, in a worst-case scenario. 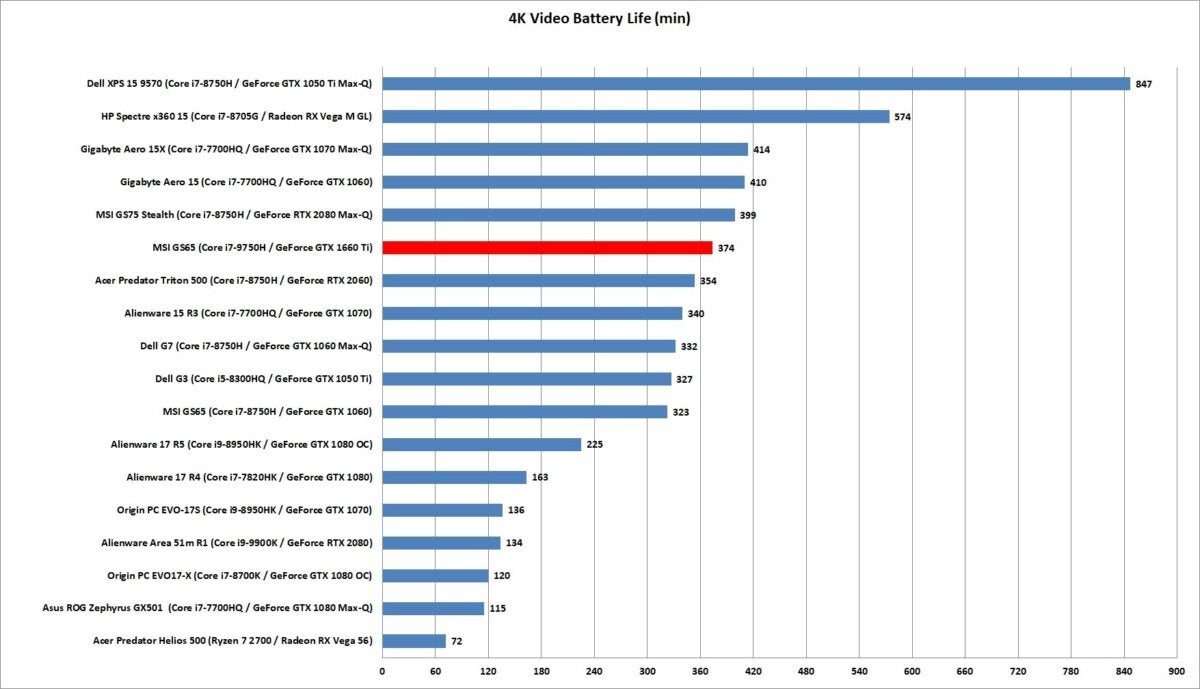 The MSI GS65 Stealth Thin gives up about 6 hours of run time when playing videos. Expect far worse if using the CPU or GPU strenuously.

It’s hard to believe but when we first saw the original MSI GS65 Stealth Thin 8RE a year ago, there was scant competition in its class. Sure, you had Gigabyte’s Aero 15X series (heavier) and  the original Asus ROG Zephyrus GX501 (faster but heavier, with compromised battery life), but few other players were pushing the kind of performance you got in the GS65 Stealth Thin.

Today, however, it feels like a whole different world. Besides Alienware’s m15, Acer’s Predator Triton 500 and the Razer Blade 15 among others, thin gaming laptops are a a crowded field now. Against this crowded field, the GS65 Stealth Thin offers top-notch performance in its class and is very price-competitive too. It just doesn’t have the same uniqueness it once did.