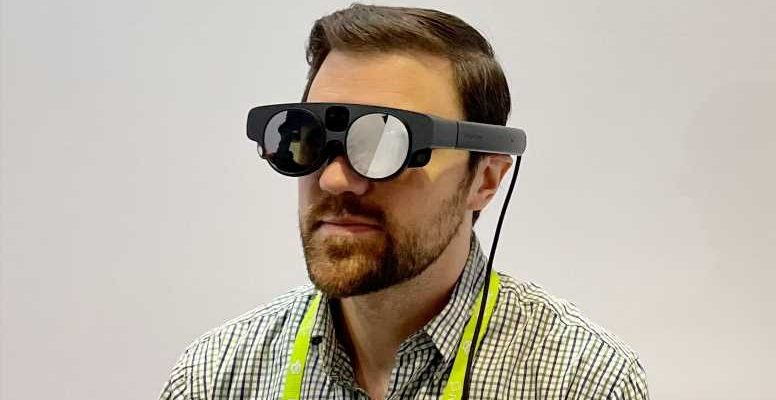 Magic Leap 2 isn’t available just yet, but when it hits the market later this year it will be directly competing with Microsoft’s HoloLens 2. Though Magic Leap 2 beats out its rival in several meaningful places, its underlying design still leaves HoloLens 2 with some advantages.

Magic Leap as a company has had a wild ride since its founding way back in 2010, with billions of dollars raised, an ambitious initial product that fell short of the hype, and a near-death and rebirth with a new CEO.

The company’s latest product, Magic Leap 2, in many ways reflects the ‘new’ Magic Leap. It’s positioned clearly as an enterprise product, aims to support more open development, and it isn’t trying to hype itself as a revolution. Hell—Magic Leap is even (sensibly) calling it an “AR headset” this time around instead of trying to invent its own vocabulary for the sake of differentiation.

After trying the headset at AWE 2022 last week, I got the sense that, like the company itself, Magic Leap 2 feels like a more mature version of what came before—and it’s not just the sleeker look. The most immediately obvious improvement to Magic Leap 2 is in the field-of-view, which is increased from 50° to 70° diagonally. At 70°, Magic Leap 2 feels like it’s just starting to scratch that ‘immersive’ itch, as you have more room to see the augmented content around you which means less time spent ‘searching’ for it when it’s out of your field-of-view.

While I suspect many first-time Magic Leap 2 users will come away with a ‘wow the field-of-view is so good!’ reaction… it’s important to remember that the design of ML2 (like its predecessor), ‘cheats’ a bit when it comes to field-of-view. Like the original, the design blocks a significant amount of your real-world peripheral vision (intentionally, as far as I can tell), which makes the field-of-view appear larger than it actually is by comparison. This isn’t necessarily a bad thing if only the augmented content is your main focus (I mean, VR headsets have done this pretty much since day one), but it’s a questionable design choice for a headset that’s designed to integrate your real-world and the augmented world. Thus real-world peripheral vision remains a unique advantage that HoloLens 2 holds over both ML1 and ML2… but more on that later.

Unlike some other AR headsets, Magic Leap 2 (like its predecessor) has a fairly soft edge around the field-of-view. Instead of a hard line separating the augmented world from the real-world, it seems to gently fade away, which makes it less jarring when things go off-screen.

Another bonus to immersion compared to other devices is the headset’s new dimming capability which can dynamically dim the lenses to reduce incoming ambient light in order to make the augmented content appear more solid. Unfortunately this was part of the headset that I didn’t have time to really put through its paces in my demo as the company was more focused on showing me specific content. Another thing I didn’t get to properly compare is resolution. Both are my top priority for next time. Tracking remains as good as ever with ML2, and on-par with HoloLens 2. Content feels perfectly locked to the environment as you move your head around. I did see some notable blurring, mostly during positional head movement specifically. ML1 had a similar issue and it has likely carried over as part of the headset’s underlying display technology. In any case it seems mostly hidden during ‘standing in one spot’ use-cases, and impacts text legibility more than anything else.

And while the color-consistency issue across the image is more subtle (the ‘rainbow’ look), it’s still fairly obvious. It didn’t appear to be as bad as ML1 or HoloLens 2, but it’s still there which is unfortunate. It doesn’t really impact the potential use-cases of the headset, but it does bring a slight reduction to the immersiveness of the image.

While ML2 has been improved almost across the board, there’s one place where it actually takes a step back… and it was one of ML1’s most hyped features: the mystical “photonic lightfield chip” (AKA a display with two focal planes)—is no longer. Though ML2 does have eye-tracking (likely improved thanks to doubling the number of cameras), it only supports a single focal plane (as is the case for pretty much all AR headsets available today).