True augmented reality hasn’t found an easy path to consumer adoption. In spite of general understanding of how AR hardware and software should theoretically work — put on glasses to see the real world overlaid with digital objects and signage — the technology needed to actually get there has been confoundingly difficult, requiring so many big and small advances that as of the last days of 2019, no one is actually selling viable consumer AR glasses.

That will start to change in 2020. Backed by ambitious cellular carriers, smartphone-dependent consumer AR hardware will soon become available in stores. Consumer AR software will continue to evolve, as well. And while fully standalone AR solutions such as Microsoft’s HoloLens 2 will likely remain exclusive to enterprises, companies will continue working on ways to free AR headsets from physical connections to phones and computers, using Wi-Fi and 5G cellular connections. Here are the big trends worth watching in 2020.

Consumer AR hardware: Nreal and everyone else

Leading technologists (and their supporters across multiple industries) predict that within a decade people will access the functionality of their smartphones through lightweight AR glasses rather than screens they manually hold up to their faces. Some people will try to make this transition in 2020, though whether it takes more or less than a decade to go mainstream remains to be seen.

Having spent 10 years investing in extended reality (XR) technologies — VR and AR — Qualcomm currently provides chips for virtually every VR and AR device on the market. Right now, the key impetus for consumer AR hardware is Qualcomm’s XR Viewer program, which posits that the first round of viable consumer AR glasses won’t be standalone, but will instead get most of their horsepower from USB-C-tethered Android smartphones with Snapdragon 855 or newer chips inside. 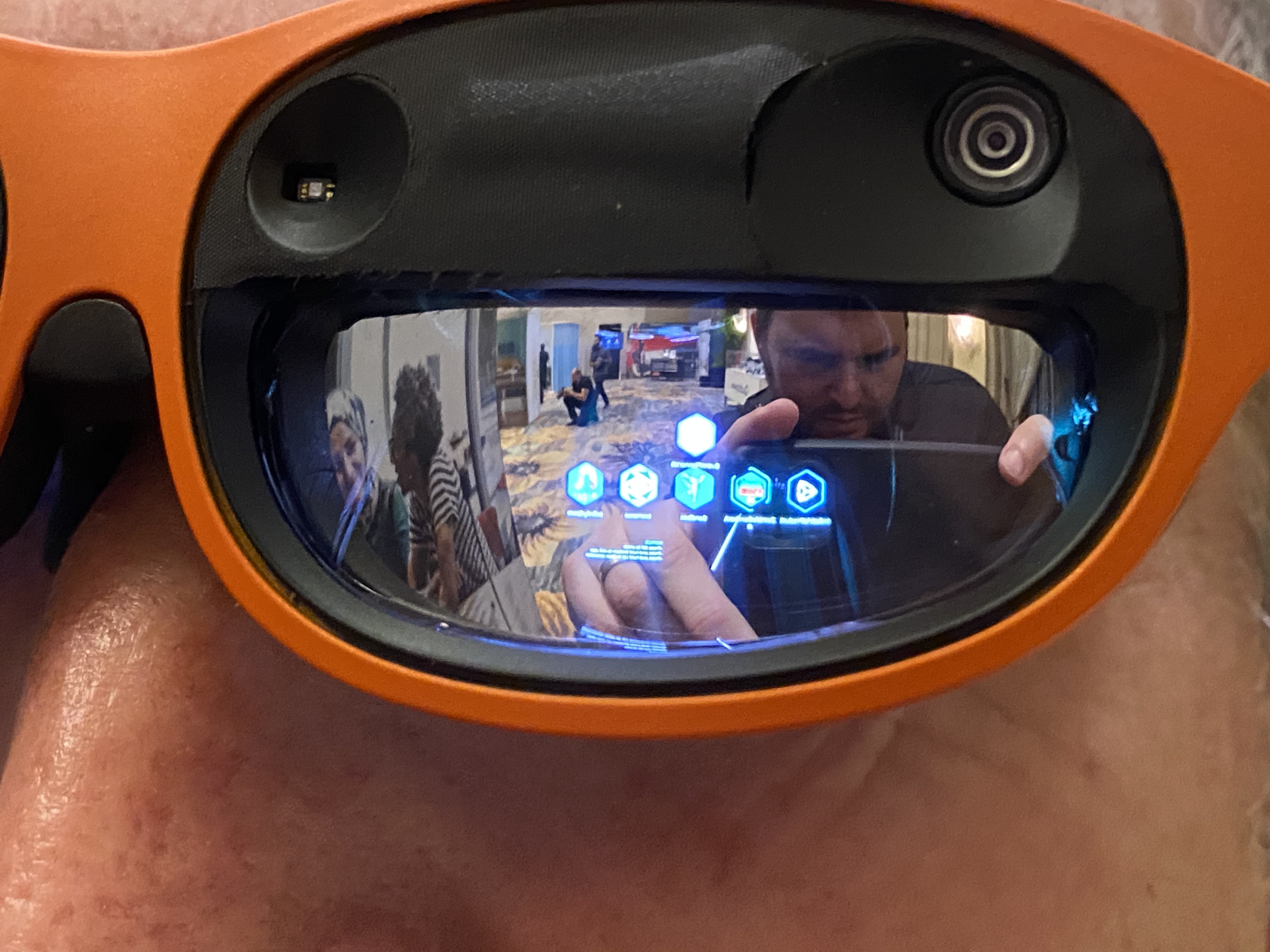 Above: Nreal Light’s lenses overlap high-resolution imagery on the world around you. 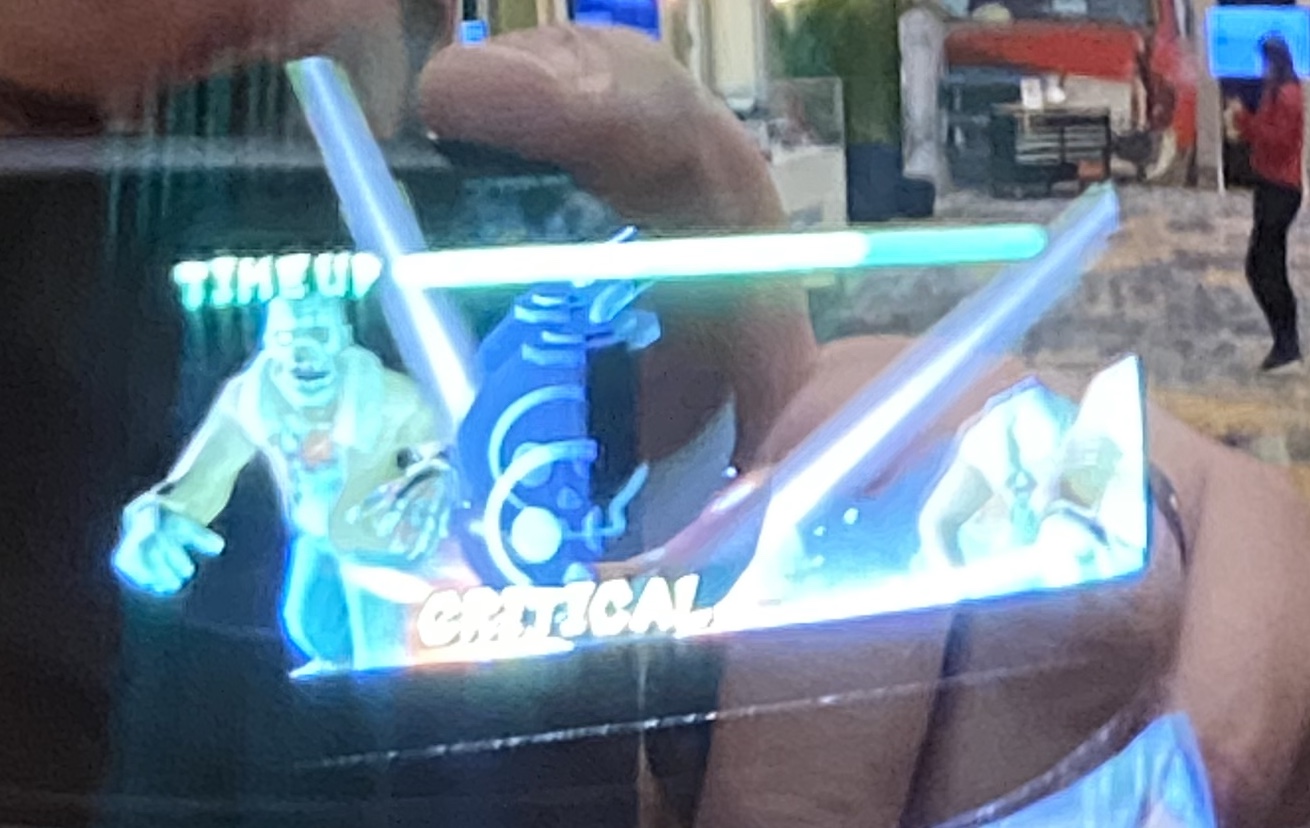 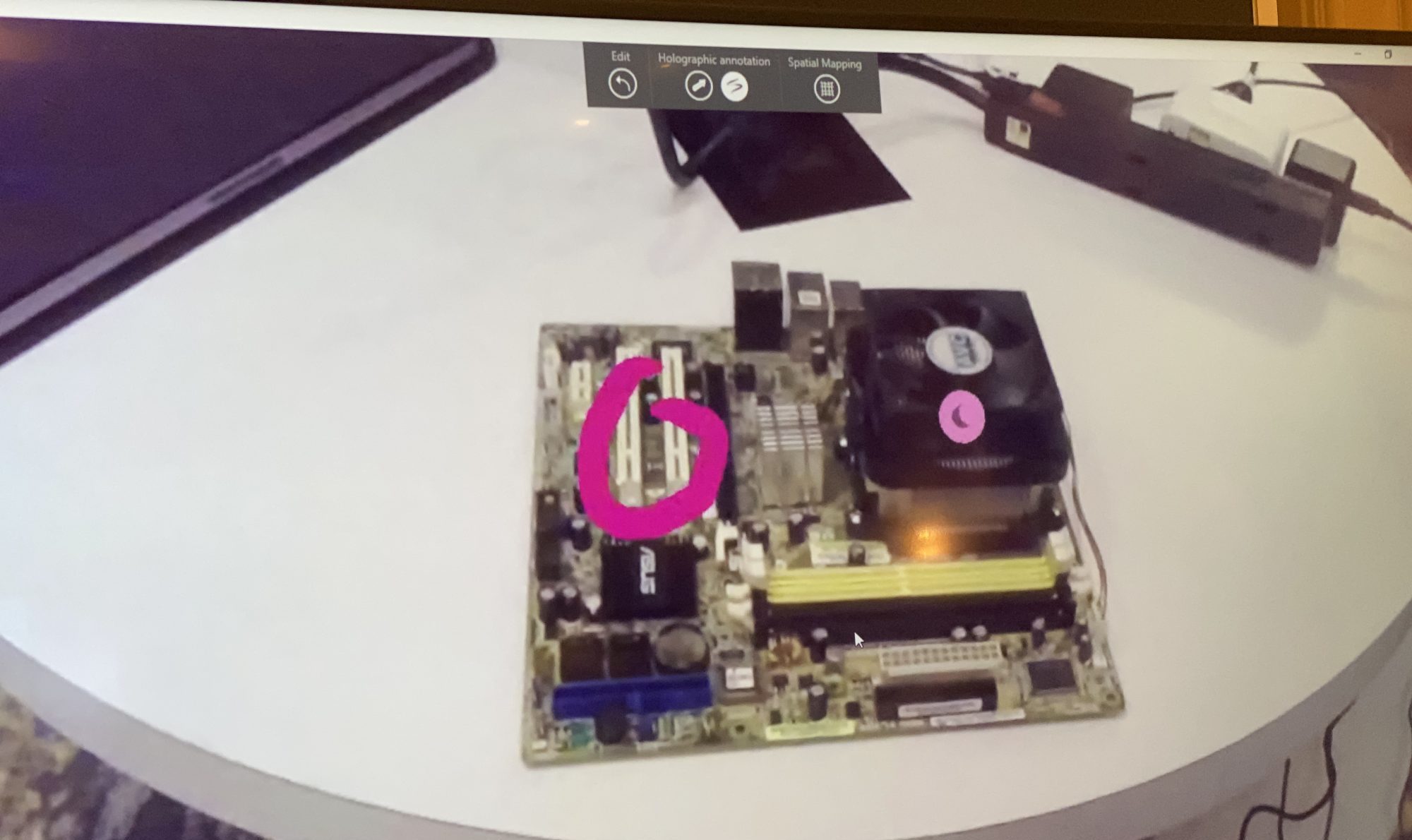 The de facto flagship for this program is Nreal Light, a pair of lightweight AR glasses that use multiple cameras, spatial tracking, and 1080p screens to augment your view of the real world with bright digital content. Nreal has already made deals with China Unicom, Deutsche Telekom, and Japan’s KDDI/Au to distribute the $500 glasses next year, in some cases with carrier-specific Android apps that will make use of both high-speed networks and the new AR technology. One demo showed the glasses enabling a wearer to get computer repair instructions — including live, persistent annotations from a remote person — while looking at the hardware in person. Another let wearers fight off realistic zombie attacks while using a phone as a position- and gesture-sensing controller.

Nreal’s glasses aren’t perfect, but they have a better chance of giving mainstream users a taste of future wearable AR technology soon than anything else I’m currently aware of. In some markets, I wouldn’t be surprised to see people wearing the sunglasses-styled Light in public, something that would have been harder to say about earlier alternatives.

Above: Pokémon Go creator Niantic has developed a Real World Platform and is working on AR glasses.

It’s unknown at this point whether any other company will mount a consumer-focused challenge to Nreal in 2020. Qualcomm’s XR Viewer program is open to multiple companies, and there have been vague hints that Nreal won’t be the only vendor of Android-compatible glasses next year, but the identities and specs of rivals probably won’t be known until CES in January, if not later. As just one example, Pokémon Go creator Niantic has announced that it’s working on AR hardware in partnership with Qualcomm, but the details and release timeline aren’t clear.

Several key players are unlikely to enter the consumer AR hardware market soon. After releasing the enterprise-focused and expensive HoloLens 2 late in 2019, Microsoft doesn’t appear to be any closer to offering a consumer AR headset in 2020. Magic Leap recently rereleased its One Creator Edition as Magic Leap 1 — seemingly even more focused on enterprise users — and said it’s not expecting the next-generation model to be released in 2020. Facebook has also suggested that it’s working on an all-day consumer wearable that won’t be ready for years. And Apple’s AR plans remain ambiguous.

Consumer AR software: Making a (use) case for AR

Last year, I was generally bearish on AR, thanks to a seemingly endless stream of shrug-worthy hardware and software announcements. As I put it in July 2018:

I’m not saying that the list of practical AR applications begins and ends right now with Pokémon Go, but there hasn’t been anything else that has taken off on a comparable level.

Nearly a year and a half later, Pokémon Go remains the AR industry’s biggest success story — a roughly $3 billion juggernaut — though there’s still a question of whether it truly qualifies as AR. Ditto on all the other tablet and smartphone apps that are augmenting … well, reality as it’s seen through a device’s camera and screen. Millions of people use Snapchat’s AR filters to change their faces or transform the looks of buildings, and who’s to say those are less worthwhile uses of AR technology than navigation or living in a “magicverse.” 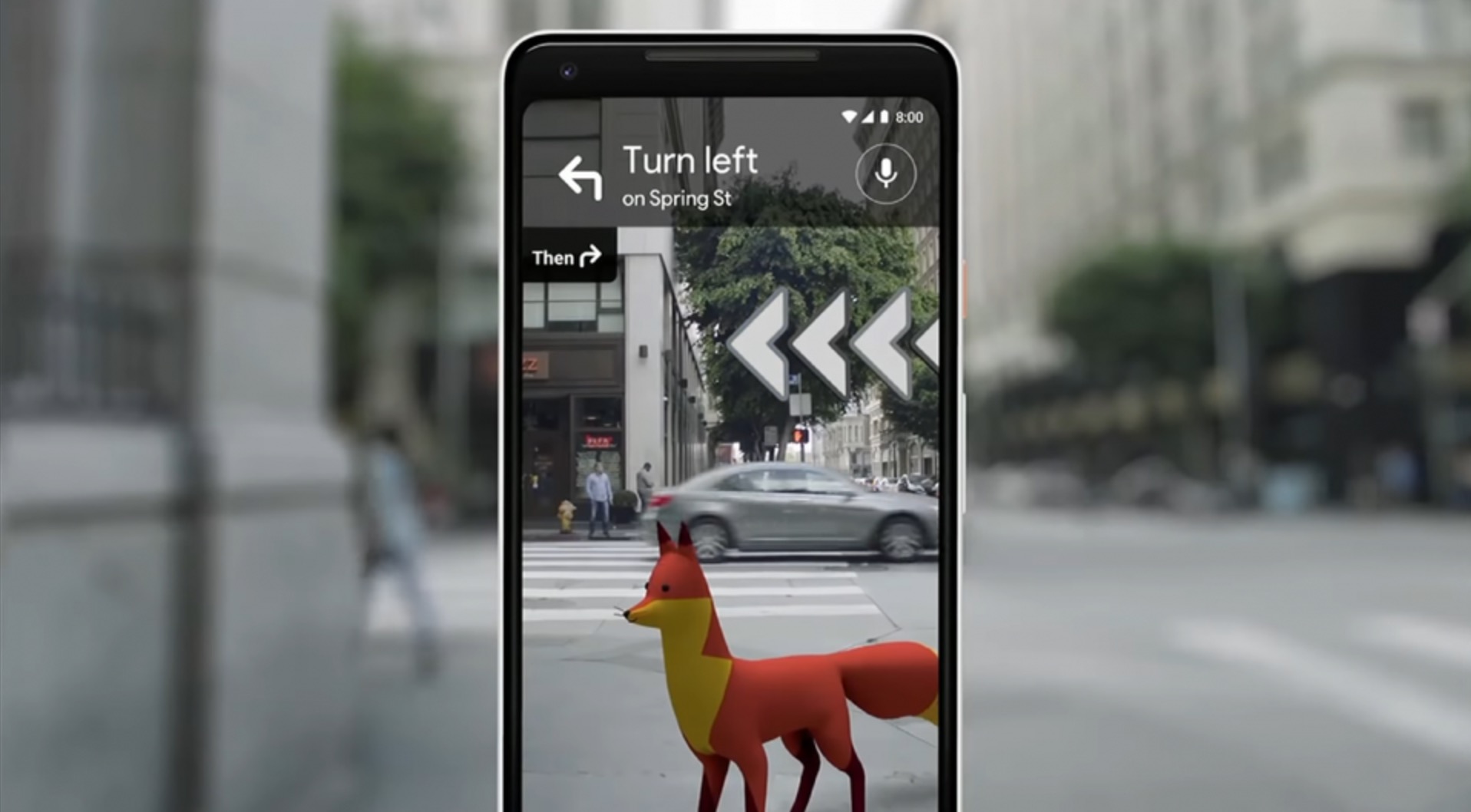 As I said last August, I see these apps as baby steps toward true AR’s future, and they’re frankly necessary prerequisites to establishing what people will and won’t actually be doing with dedicated AR hardware. Do people really want to use AR to shop for and decorate their homes? Will they pay more for AR navigation integrated into car windshields? If they’re interested in these sorts of features in smartphone apps, the answer is more likely to be yes.

Throughout 2020, we’re most likely going to see handfuls of apps for early consumer AR wearables like Nreal’s, and plenty more apps that are used through smartphones and tablets. I would also expect to see some developers begin experimenting with adding wearable support to existing AR apps where appropriate, and cellular companies pushing more AR collaborations that will show off their 5G networks — a trend we’ve seen with Snapchat and Verizon in the United States, while European, Japanese, and South Korean carriers pursue similar deals overseas.

Something important will be taking place behind the scenes in 2020: Qualcomm, Apple, and other companies involved in smartphone-based AR solutions will be wrestling with which wireless technologies to use instead of cables — probably in 2021 and 2022. The leading contenders are 802.11ay Wi-Fi and 5G.

Current chip and display technologies aren’t capable of squeezing an entire smartphone’s worth of processing and screen power into the frames of a lightweight pair of glasses. For that reason, Magic Leap offloaded most of its computing into a large wearable puck, Microsoft placed its computer inside a gigantic visor, and other companies are using smartphones physically connected with USB-C cables to lighter glasses. The problem is that the cables will be conspicuous and may in some cases limit your range of movement. 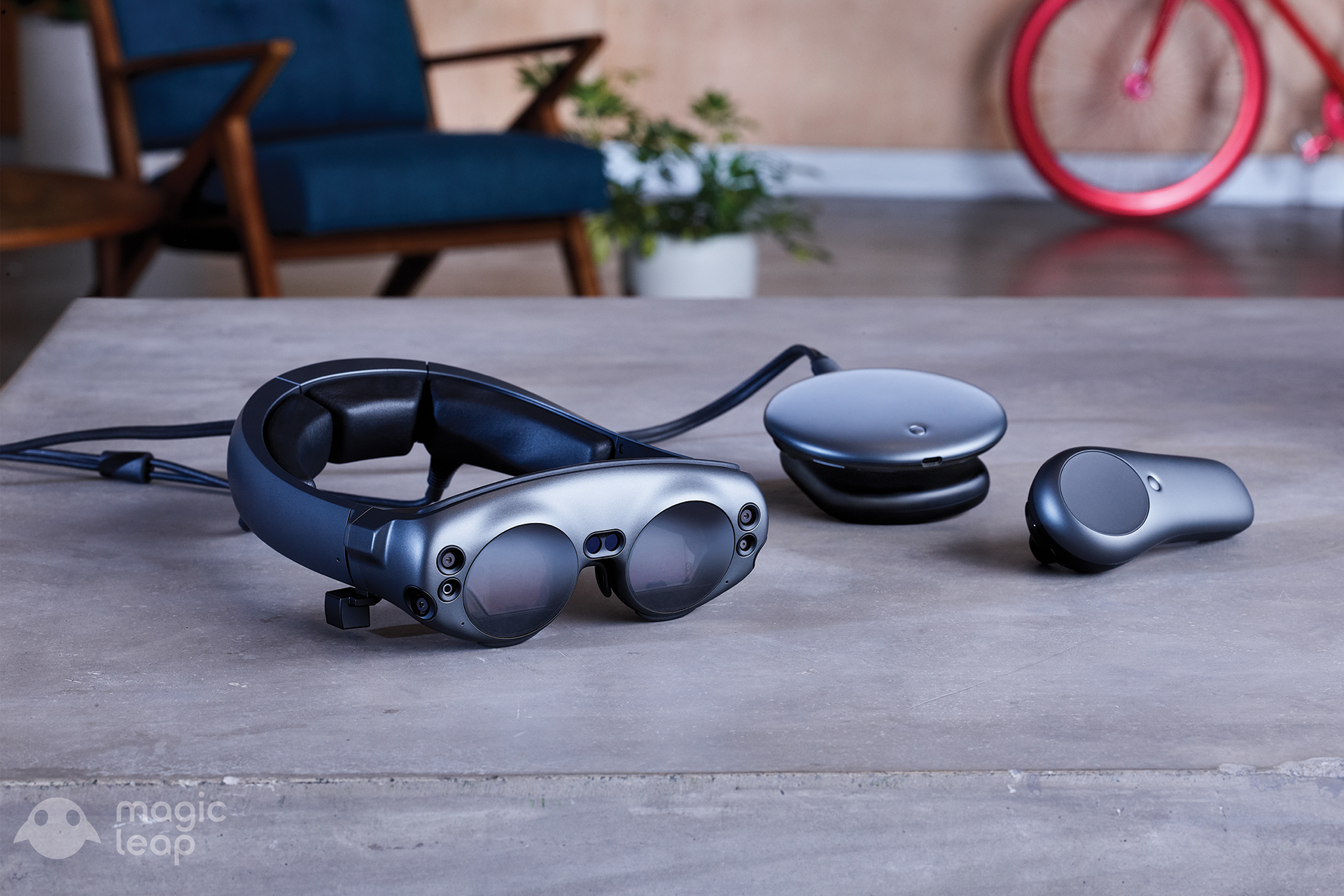 Above: Magic Leap’s current hardware requires the user to wear a puck containing its computer and carry at least one controller.

Prior-generation Wi-Fi and cellular standards don’t have enough bandwidth to feed low-latency, high frame rate XR displays — at least, not good ones. So the latest standards, including Wi-Fi 6 (802.11ax), 60GHz Wi-Fi (802.11ay), and mid- or high-band 5G (3.5GHz or millimeter wave) will in the future connect AR glasses wirelessly to nearby smartphones, computers, or direct networks armed with edge cloud computers.

It’s unlikely that we’ll see much in the way of actual consumer wireless AR hardware in 2020, but it’s possible that early demos will pop up later in the year. Assuming they work properly, they’ll serve as a reminder that consumer AR is still in its earliest days, with plenty of exciting evolution yet to come over the next decade.